According to a new survey, parents are finally waking up to all the mischief their children can become involved in via their cell phones with half of them saying “sexting” is their biggest worry as the new school year approaches. 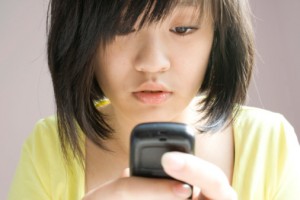 FoxNews.com is reporting that the survey, which polled more than 500 parents of children ages 10 to 18, was conducted by SpectorSoft, a software company that produces internet and cell phone monitoring programs. The results revealed that grades and sports performance were not parents” primary concern as the new school year approaches. Forty-nine percent said their biggest worry was that their child would become involved in sexting.

Sexting rates so high on parents’ list of concerns because teens and tweens don’t always grasp the severity of what they’re doing when they text a racy picture to friends.

“There’s not much time between the impulse and pushing the ‘send’ button,” says Lisa Shaw, senior director of Child Safety at SpectorSoft. “The judgment is very poor with tweens and teens. We have seen people in our government making these mistakes and there is that fine line between what’s funny and appropriate and what isn’t.”

The good news in the survey is that parents appear to be catching on to the problems associated with inappropriate use of cell phones by their children. Eighty-eight percent said they check their child’s mobile phone or bill several times a month to be sure their calls and texts are acceptable and another 34 percent said they will check their child’s phone and bill details more frequently once school gets underway. Eight-four percent told SpectorSoft they are speaking to their child more frequently about the dangers of sexting.

Bryan Bowers, author of Keep Your Family Safe Online gives tips to parents about how to keep their child safe while using today’s technology. He recommends that parents get their child’s password to Facebook and Twitter accounts and frequently check these sites. They should also “friend” them on Facebook and follow them on Twitter so the child knows his or her parent is on the site. Another good idea is to check monthly phone bills to see who a child texts most often. Parents should consider installing parental control software that will send them alerts whenever something “irregular” occurs on their child’s cell phone such as a suspicious text.

It’s also important to talk to them about what’s going on in their lives and letting them know they can come to you no matter what.

In addition, he recommends that parents frequently remind their children that “what they say online can have long-lasting repercussions, and that they shouldn’t post anything that might come back to bite them as an adult.”