The Archbishop of Baltimore is accusing the Catholic governor of Maryland of acting out of “mere political expediency” in his plans to sponsor a same-sex marriage bill. 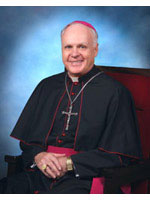 The Washington Post is reporting that the office of Governor O’Malley just released an exchange of letters between the governor and Archbishop Edwin F. O’Brien in which the two confronted one another about O’Malleys decision to support same-sex marriage legislation.

In a letter dated July 20, O’Brien told the governor that such a stance would “deeply conflict” with his Catholic faith and reminded him that “Maryland is not New York. We urge you not to allow your role as the leader of our state to be used in allowing the debate surrounding the definition of marriage to be determined by mere political expediency. The people of Maryland deserve no less.”

The governor, who often attends daily Mass and sent all of his four children to Catholic schools, has until recently been an advocate of civil unions as an alternative to same-sex marriage. However, when a bill to legalize same-sex marriage in the state narrowly failed in the last legislative session, supporters began to pressure O’Malley to play a more visible role.

In both his response to O’Brien’s letter and in public, the governor is framing his support for same-sex marriage in legal terms.

“I have concluded that discriminating against individuals based on their sexual orientation in the context of civil marital rights is unjust,” O’Malley wrote to the archbishop. “I have also concluded that treating the children of families headed by same-sex couples with lesser protections under the law than the children of families headed by heterosexual parents, is also unjust.”

But O’Brien’s appeal was much more personal.

“I am well aware that the recent events in New York have intensified pressure on you to lend your active support to legislation to redefine marriage,” O’Brien wrote. “As advocates for the truths we are compelled to uphold, we speak with equal intensity and urgency in opposition to your promoting a goal that so deeply conflicts with your faith, not to mention the best interests of our society.”

O’Brien continued: “It is especially hard to fathom your taking such a step, given the fact that our requests last year for you to sponsor legislation to repeal the death penalty and support students in Catholic and other nonpublic schools went unheeded.”

The Archbishop was referring to legislation that would have created a tax credit for businesses that contribute to scholarships for private school students. The Governor formerly supported the bill but did not do so in the last legislative session, citing concerns over the state’s fiscal situation. O’Malley also sponsored a bill to repeal the death penalty but it failed to pass.

Even thought the governor is showing no signs of backing down, neither is the Archbishop.

“Preserving the central role of the natural family unit has always been — and should continue to be — the reason why our government recognizes marriage as existing between one man and one woman,” O’Brien insisted.

O’Malley is likely to ignore O’Brien’s wise counsel. As Catholic blogger Thomas Peters of American Papist writes, the governor probably feels encouraged by the adulation heaped on New York’s Cathoalic Governor Andrew Cuomo after he ignored his bishop to champion a same-sex marriage bill into law.

“There’s a lesson here,” Peters writes. “When one Catholic governor gets away with ignoring the warnings of his bishops, other Catholic governors and elected officials feel emboldened to do the same.”