This fabulous witness was sent to us by a woman who was once very involved in the New Age but, thanks to God’s grace, found her way out of it. 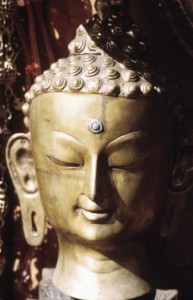 “The New Age commentary Johnnette [on EWTN’s Women of Grace] this week is excellent . I was pulled into that world, and know that what starts off innocently becomes focused on developing one’s will power to ‘save one’s self.’ Rather than surrender and attuning oneself to God, and being filled with God’s Love and Holy Spirit, it now seems more like “cleaning the jail cell.” I now view it as man trying to find a way out of fear, before God came as the Messiah. It becomes so numbing that I now understand why in India, people would pass the dying on the streets, and call it ‘karma.’ Jesus came to teach people to reach out and love others, to break through this numbing and caste systems, and stone heartedness. People do not realize where it is leading, and project the ‘Christian motives’ onto these teachings.

“Have you read Autobiography of a Yogi? You mentioned a lady in 1979, I think, who started ‘Christian Yoga.’ From my experience, it started way before, and seems to be a reaction against hated Christian missionaries coming into India. They sent their own ‘missionaries’ into America, and fooled people. The yogis develop strong mental powers and if one starts to participate, there is a great peace, but not an inclusive loving peace – it’s more like a lonely isolated peace. I put on the Miraculous Medal, and suddenly I was out of it and free!! I could see things totally differently, and saying the rosary brought a cloak of peace and love around me.

“I was also involved with Self Realization Fellowship, and ‘self’ was explained as ‘soul.’ Not selfish self, but the holy soul, to realize our oneness with God. It all sounds good, but it keeps one away from the Eucharist, the very food one needs to truly be united. I now know that group was a form of the Arian heresy, where it taught a ‘Jesus’ who evolved to his status over many incarnations. People cling to these types of things, because life is scary. People turn to alcohol, drugs, astrology, trying to cope, and I was afraid to let go, even though certain elements really bothered me. I would try to go to Catholicism, but was held back by fears and confusion from childhood. Alone, I could not do it. But then putting on the Miraculous Medal, Mary and God helped me and rescued me and swiftly brought me into the right flock!!

“I watched the yoga people so full of pride and focused on physical aspects of physical health who are more and more trapped in their own isolated will. It is a clever and subtle deception. Hatha yoga activates spinal centers and energy centers and starts to build this isolation, without people knowing it. If you think that lady was the start, you need to read about Vivekananda and Paramahansa Yogananda coming in the late 1800s and early 1900s. The ladies that were his students and began to run the organization were ex-Mormons who brought a lot of that philosophy also into the group. The Autobiography is a classic book among yoga teachers and students. It quotes great Catholic saints, and makes yoga seem very universally holy and God focused. The Eucharist is different….the only physical posture needed is kneeling. God bless you!”

The concept of yoga missionaries deliberately coming to the West to introduce yoga as an “exercise program” in order to get people involved in its practice is true.

In the January 1991 issue of Hinduism Today, Swami Sivasiva Palana writes, “A small army of yoga missionaries . . . beautifully trained in the last 10 years, is about to set upon the western world. They may not call themselves Hindu, but Hindu knows where yoga came from and where it goes.”

This statement was made more than a decade after the 1979 meeting of the World Congress on Hinduism in Allahabad, India which was attended by more than 60,000 delegates from around the world. During this conference, one of the speakers proclaimed: “Our mission in the West has been crowned with fantastic success. Hinduism is becoming the dominant world religion and the end of Christianity has come near.”

Our thanks to this blog reader for sharing her story with us!