In what is certainly bad news for the president’s re-election hopes, women voters appear to be turning their backs on President Obama in record numbers. 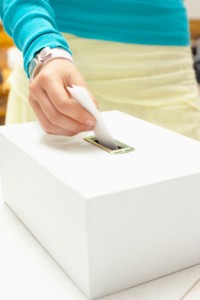 The Washington Times is reporting that the president has lost a large portion of a key voting block – the female vote – during the last two years. In 2008, women voted for Obama over John McCain (R-AZ) by a margin of 56-43.

In the 2010 elections, women defected from the Democratic party in historic numbers. Post-election surveys showed women voters favored Republican congressional candidates over Democrats by 49 to 48 percent – the first time in at least 30 years that the conservative party garnered the majority of the women’s vote.

Democrats are trying to play down these numbers, saying they’re just a reaction to the bad economy.

“The explanation for that is really economic,” said Rep. Debbie Wasserman Schultz, new chairwoman of the Democratic National Committee (DNC). “Women make so many of the economic decisions in households. And so the struggle economically is really borne by women, especially women who are heads of their own households.”

However, Republican Congresswomen see the reason for the defections as being far beyond just the recession.

“There is a solid reason why women moved away from the Democratic Party in 2010,” said Rep. Marsha Blackburn, (R-TN). “They want their problems solved. What happened with Obamacare was not health care reform. Females saw that as complicating the issue. They completely disagreed with the course of action.”

Even though the president’s job approval among women has risen from 43 percent in April to 50 percent today, a poll taken before the midterm found that a majority of independent women voters view both of the president’s signature issues – ObamaCare and the $821 billion economic stimulus plan – as failures.

“From the health care takeover to our out-of-control debt, Washington has imposed a future for them and their children that quite frankly they don’t like, and I don’t like either,” said freshman Congresswoman Rep. Diane Black (R-TN). “The government is spending more, but the outlook for all of us is getting worse, and so I believe women are saying, ‘Enough is enough.’”

The president has no intention of losing such a vital voting block, however, and is already at work trying to woo back the disenchanted.

“Whether it is promoting work-family balance, equal pay for equal work, or the Affordable Care Act guaranteeing women security in their health coverage, it is clear the president has put women’s issues at the forefront of his agenda,” said Obama re-election spokeswoman Katie Hogan said.

The President is also promising the women in his audiences that he aims to prevent the defunding of Planned Parenthood. He also likes to remind them that he appointed two women to the Supreme Court and created the White House Council on Women and Girls to advance women’s issues around the world.

Ms. Wasserman Schultz says the campaign’s outreach for women in 2012 will be aggressive.

“The fieldwork, the mobilization of women, the active involvement of women is going to be unprecedented,” she said.

But will it work?

Many doubt it. Republicans point out that a majority of Americans are actually in favor of defunding Planned Parenthood and that female voters are turned off by the Democrats’ policies of higher taxes, more regulation and interference in local education issues.

Rep. Cynthia M. Lummis, Wyoming Republican, said years of studying voters’ habits in the Wyoming Legislature and in Washington have convinced her that female voters take a longer-range view than men.

“The candidate who will succeed with women in 2012 will be the candidate who appeals to the future of our country and economic stability,” she said. “It has less to do with political party than with the vision they paint.”