Outrage is growing over President Barack Obama’s speech yesterday in which he indicated a desire to impose borders for Israel and Palestine that will resemble those drawn in 1967 after the Six=Day War which will leave many Jewish and Christian holy sites in the hands of the Hamas-aligned Palenstinians. 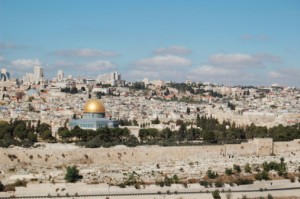 “We believe the borders of Israel and Palestine should be based on the 1967 lines with mutually agreed swaps, so that secure and recognized borders are established for both states,” the president said in his speech. “The Palestinian people must have the right to govern themselves, and reach their full potential, in a sovereign and contiguous state.”

However, as Jim Hoft points out on Gateway Pundit, these borders would give half of Jerusalem to the Palestinian terrorist group, Hamas. This would include the Wailing Wall, the Temple Mount, and all of Old Jerusalem in which some of Christianity’s holiest sites are located, such as The Church of the Holy Sepulchre, the site of Jesus’ tomb, the entire Via Dolorosa, Golgatha, and the Mount of Olives.

“By making it U.S. policy that the 1967 borders are the starting point for negotiations, Obama put Israel on the defensive in its fight for security and for its cultural – and the Christian cultural – heritage in Jerusalem,” Koffler says.

He also points out that Obama’s statement overturns an assurance from former president George W. Bush to Israel in a 2004 letter that a demand for a return to the 1967 borders is not a policy of the United States.

“This assurance was made in return for a concrete step, the withdrawal of Israel from Gaza,” Koffler writes. “This concrete step cannot be reversed. The assurance could be reversed by an unreliable ally. Today, it was.”

In addition to negating former agreements between the U.S. and Israel, Obama’s push to return to the 1967 lines is asking much of the Israelis, but nothing of Hamas.

” . . . [Y]ou’d expect it to be at least in return for something,” says syndicated columnist Charles Krauthammer. “But the Palestinians in the two-and-a-half years of this administration have not offered them anything as a concession to Israelis. [Palestinian Authority President] Mahmoud Abbas has boycotted the negotiation and then a few weeks ago, he joined in government with Hamas, dedicated to extermination of Israel. In return for all of those and the Israel gestures, Obama makes the biggest concession of the entire Arab-Israeli negotiations in 50 years.”

Even more embarrassing for the administration is a reminder that in 2008, just after claiming the Democratic nomination for president, then-Senator Barack Obama reassured skeptical pro-Israel groups that “Jerusalem will remain the capital of Israel and it must remain undivided.”

Israeli Prime Minister Benjamin Netanyahu, who reacted coolly to the president’s speech, may choose to remind the president of this earlier promise during his visit today and in his address to Congress next week.