The White House once again breached its promise of transparency when it refused to allow The Boston Herald full coverage of President Obama’s fund-raiser yesterday because it objected to what the paper chooses to put on its front page. 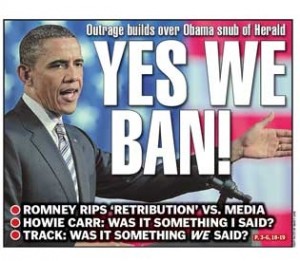 The Boston Herald is reporting that White House spokesman Matt Lehrich refused their request for full coverage of the fundraiser because the paper put an op-ed by Mitt Romney on its front page a few months ago.

“I tend to consider the degree to which papers have demonstrated covering the White House regularly and fairly in determining local pool reporters,” Lehrich told the paper.

“My point about the op-ed was not that you ran it but that it was the full front page, which excluded any coverage of the visit of a sitting US President to Boston. I think that raises a fair question about whether the paper is unbiased in its coverage of the President’s visits,” Lehrich wrote.

Lehrich went on to insist that the Herald wasn’t being purposely barred from the press pool, saying the Boston Globe had already made arrangements to cover local pool duty.

“As we have in the past — including the multiple occasions on which the Herald has supplied local pool reporters — we will continue to consider the Herald for local pool duty for future visits,” Lehrich wrote.

Pool duty means certain reporters are given access to an event and must share their material with the rest of the press. The Herald claims it has been bypassed for pool duty during Obama’s last two visits despite asking the White House to be the local pool reporter.

“Newspapers don’t have to be unbiased to get access,” said Boston University journalism professor Fred Bayles. “You can’t just let only the newspapers you want in.”

Even the Romney campaign weighed in on the controversy. Romney spokesman Eric Fehrnstrom defended the March 8 op-ed that has the White House so upset:

“That op-ed was about jobs, which apparently is a sensitive subject for the thin-skinned people around the president. The White House may be able to manipulate pool coverage, but they can’t manipulate the fact that millions of Americans are out of work because of President Obama’s failure to create jobs and get our economy moving,” Fehrnstrom told the Herald.

The Obama Administration does not have a good track record with the press. In addition to snubbing Fox News early in the president’s term, they have also had clashes with San Francisco Chronicle and the Pleasanton Weekly . In addition, an Orlando Sentinel reporter was locked in a closet during a fundraiser hosted by Vice President Joe Biden to prevent him from speaking to the guests.

Glenn Reynolds of Instapundit.com and a University of Tennessee law professor who has followed White House-press relations told the Herald he sees a pattern developing.

“It’s all about control,” Reynolds said. “At some point this will blow back on them. Most presidents behave in a more refined fashion. Experience has shown that acting presidential is good politics and to their advantage.”