A new poll has found that the vast majority of Americans are opposed to allowing school children to be taught that homosexuality is a normal alternative lifestyle. 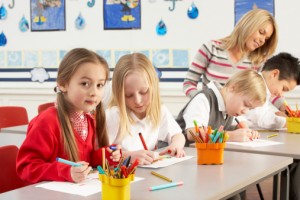 LifeSiteNews is reporting that the poll, conducted for World Net Daily by Wenzel Strategies found that only 22 percent of respondents contacted between April 19-21 approved of such teaching.

When asked, “Do you believe elementary school children should be taught that homosexuality is a normal alterative lifestyle,” 65 percent said they disapproved with 13 percent saying they were unsure.

“Whether they object on moral grounds or simply out of concern that many U.S. schools are failing in their core missions of teaching basics doesn’t really matter – the vast majority of American adults want this type of curriculum kept out of the classroom,” said Wenzel chief Fritz Wenzel.

“Americans are particularly averse to the introduction of gay issues into the curriculum of the nation’s elementary schools,” Wenzel continued.

“Even among Democrats, who have been much more sympathetic to the promotion of gay issues, just 32 percent said they believe this should be taught to elementary school students. Just 11 percent of Republicans and 25 percent of political independents said the same thing.”

In addition, the poll found that only one in five people supported exposing students to “Gay Pride” and “Gay History Month” lessons in school, with 68 percent opposing such teachings.

Respondents also overwhelming rejected (73%) the notion of including instruction on gay sex acts as part of a school’s “safe sex” education program.

“At issue in the minds of respondents may be the idea that such lessons simply confuse younger students at a time when they are typically taught basic, concrete lessons of math, science, reading, and language,” Wenzel said.

“Younger students obviously know the difference between genders, but sex is completely foreign to the average elementary school student and these types of lessons are not helpful, respondents seem to be saying.”

This poll is particularly relevant since President Barack Obama appointed a homosexual activist, Kevin Jennings, to the position of assistant deputy secretary of the Office of Safe and Drug-Free Schools. Jennings founded the Gay, Lesbian and Straight Education Network (GLSEN) that has made deep inroads into the nation’s public schools by disguising pro-homosexuality programs as anti-bullying efforts.

The poll also confirms why the passage of a bill last month in the state of California that mandates pro-homosexuality teaching in all public schools has caused such outrage among parents in that state.

Randy Thomasson, President of the pro-family SaveCalifornia.org, called the measure “the most radical sexual indoctrination ever of children in California public schools” and has called upon parents to take their children out of public schools and enroll them in faith-based or home- schools.