During testimony on behalf of the U.S. bishops before a Senate Judiciary Committee hearing last week, Cardinal Theodore McCarrick addressed the “growing threats to religious liberty” Catholics are currently facing in America as a result of the spread of radical secularism. 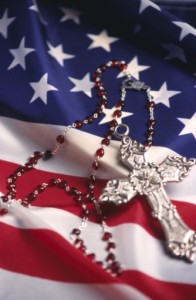 According to the Catholic News Agency (CNA), McCarrick, the retired Archbishop of Washington DC, testified at a hearing which was prompted by concerns over the civil rights of U.S. Muslims.

During his testimony, McCarrick told the Senators that most instances of religious intolerance in modern Western countries isn’t coming from tension between faiths. Rather, religious intolerance more often originates from “a radical secular perspective that insists that no moral principle or religious belief should ever challenge individual decisions.”

“Acts of bias and discrimination towards Catholics and our beliefs are often expressed very publicly,” Cardinal McCarrick noted. “For example, we are charged with discrimination or called ‘bigots’ when we advocate for the traditional understanding of marriage between one man and one woman, which many religious and non religious traditions have supported throughout human history.”

“We advocate for an authentic vision of marriage not to offend or to treat people unjustly, but to offer a positive and healthy model of the human family, which has served as the foundation of society throughout the ages.”

“The identity and integrity of our Catholic social institutions, or indeed those of other religious traditions, are also being threatened,” he continued.

“There are well known contemporary examples,” he reminded lawmakers, “where the state would force religious groups and individuals to choose between following their religious beliefs and practices and following the dictates of law.”

Some examples would be attempts to force Catholic institutions to provide the morning after pill or to pressure adoption agencies to allow same-sex couples to adopt.

“Where is the respect for religious freedom in compelling a religious entity to act in ways which contradict its most basic moral principles?” he asked.

Referencing the recent debate over the controversial hearing over home-grown terrorism by Muslims living in the United States, McCarrick said the U.S. should focus on showing the Muslim world an example of healthy religious pluralism, rather than by giving into an aggressively secularized vision of social life.

“As predominantly Muslim societies wrestle with how to treat religious minorities, let them look to our nation,” he said, “where we work to ensure that their Muslim sisters and brothers are treated with dignity and their religious identity and beliefs are treated with respect.”

“Let them see a people blessed with hard won religious freedom, living out our commitment to the rights of all by demonstrating full respect for the identity, integrity and freedom of all religions and their institutions.”