Prayers are desperately needed for the people of Japan where one of the largest earthquakes ever recorded struck 80 miles offshore, spawning a deadly tsunami that left hundreds dead. 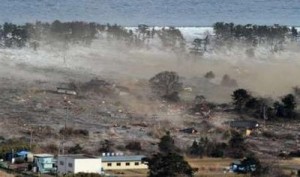 The Associated Press is reporting that a magnitude 8.9 quake struck about 80 miles off Japan’s eastern coast at 2:46 p.m. today. It is the biggest earthquake to hit Japan since officials began keeping records in the late 1800’s, and is one of the biggest ever recorded in the world. More than 50 aftershocks followed, many of them registering as high as magnitude 6.0.

The quake struck at a depth of six miles and a spawned a 23 foot tsunami that swept several miles inland, washing away homes, boats, and cars before it retreated back to sea. In its wake, police found close to 300 bodies from the northeastern coastal city of Sendai. Dozens more were confirmed killed by the quake and at least 350 are still missing.

“Our initial assessment indicates that there has already been enormous damage,” Chief Cabinet Secretary Yukio Edano said. “We will make maximum relief effort based on that assessment.”

Officials fully expect the death toll to climb, given the scale of the disaster.

Japan sits on the Pacific Ocean’s “Ring of Fire,” which is an area prone to earthquakes and volcanic eruptions where 90 percent of the world’s earthquakes occur. But not even this long history of earthquakes prepared the people for the huge tsunami that crashed ashore, destroying everything in its path.

Tsunami warnings were extended from Japan to Russia, Indonesia, New Zealand and Chile. The first waves hit Hawaii about 9:00 a.m. EST when a three foot tsunami was recorded on Oahu and Kauai. Officials are warning that larger waves could be on the way.

Osamu Akiya, 46, was working in Tokyo at his office in a trading company when the quake hit, and said the trembler cracked walls and sent bookshelves and computers crashing to the floor.

“I’ve been through many earthquakes, but I’ve never felt anything like this,” he told the AP. “I don’t know if we’ll be able to get home tonight.”

Complicating matters is the condition of roads leading into the hardest hit areas, which were severely damaged by the quake or clogged with debris from the tsunami. Communication lines are also down and rail service has been suspended as far away as Tokyo where 10 million people rely on it for transportation every day. Tokyo’s Narita airport has also been closed indefinitely.

In addition, thousands of residents living near a nuclear power plant in Onahama have been ordered to evacuate because the plant’s system was unable to cool the reactor. The reactor was not leaking radiation but its core remained hot even after a shutdown. The plant is 170 miles  northeast of Tokyo. Thus far, there have been no reports of radioactive leaks at any of Japan’s nuclear plants.