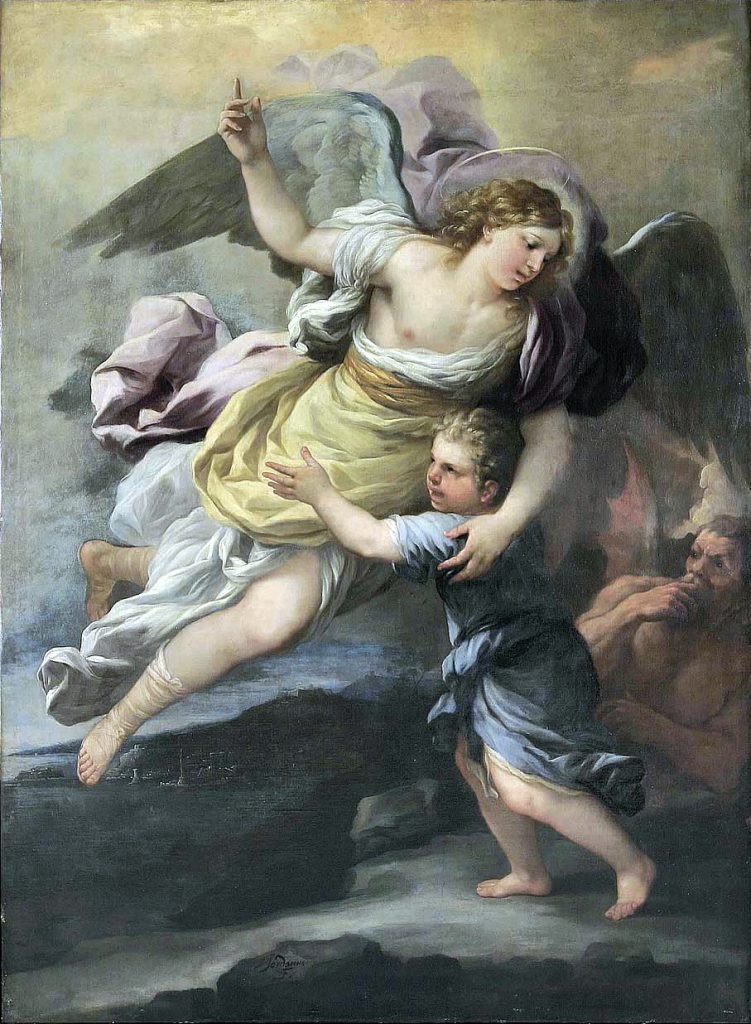 Angels are all the rage these days. Often depicted as plump little cherubs or New Age nymphs, put one of these winged creatures on the cover of a book or greeting card and it’s bound to sell. How much do we really know about the extraordinary beings who keep careful watch over us every day of our lives?

For starters, we must try to wrap our heads around the fact that these celestial bodyguards at our side are pure spirits, incorporeal beings, which means they are possessed of characteristics that challenge even the most imaginative among us.

We know from Scripture and the early Fathers of the Church that angels were created by God when He formed the heavens. “In the beginning God created Heaven and earth” (Gen 1:1). That the angels were already present during the creation of the starry skies is evidenced by the words God spoke to Job, “When the stars were created, all my angels sang praises to Me” (Job 38:7).

St. Thomas Aquinas discerned that each angel is a species unto itself. Unlike man, who is varied by race but all one species, each angel is a “direct creation of God.” While there are an estimated 8.7 million species living on our planet at the present moment, the number of angels, although technically unknown, is considered to be staggering

We know that the Lord has arranged angels in an orderly fashion just as He arranged man in orders of race, tribe, family, and nation. The order of angels is according to choirs, of which nine have been revealed to us, although most theologians agree that this is not a complete number. In descending order from the most powerful and closest to God to the least powerful and furthest from God, the choirs are: Seraphim, Cherubim, Thrones, Dominions, Virtues, Powers, Principalities, Archangels, and Guardian Angels.

Their rank may be different but all of the angels in these choirs share the same qualities. For example, one of their most outstanding traits is their exalted knowledge and intelligence. Their intelligence is so keen, in fact, that they are often referred to by theologians as “minds” or “intellectual beings.” 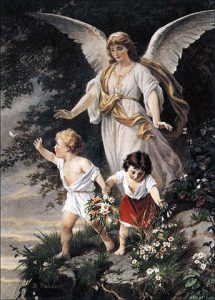 Angels have a penetrating intelligence that enables them to understand an entire field of science in a single glance. As Cardinal A. M. Lepicier writes in his book, The Unseen World, an angel “is able, at one glance, to taken in the whole field of science laying open to his perception, just as we, at one glance, can take in a view.” What man learned in increments, angels know instantly. For example, a man can look at a plant and see it’s stem, leaves, flowers or fruit. When an angel looks at the same plant, it instantly understands everything about it, from the origins of the seek to its every botanical characteristic. This is because, being higher by nature than man, and therefore closer to God, the angel receives more Divine Light whereby he is infused with knowledge about the spiritual and material universe.

Although incorporeal, angels are more than capable of communicating with one another with a language all their own. Of course, because they are spirits and don’t have vocal chords, “speech” among them, as we know it, is impossible. St. Thomas believes they talk to each other “by a mere act of the will, opening their mind and revealing whatever ideas they wish to convey to others of the same nature as themselves.”

As Father Pascal P. Parente writes in his book, The Angels: In Catholic Teaching and Tradition, “although we can’t even imagine this soundless communication, it is much stronger, clearer, and more perfect than human language because our words can only serve as symbols of the ideas in our minds.”

With their unique way of communicating, angels can directly transfer ideas without having to grope around for the right words to express it.

Free will is another essential constituent of every spiritual nature, divine, angelic, and human. That a number of angels chose not to remain loyal to God is evidence of the existence of the will in angelic beings. Because an angel’s act of the will is determined solely by the intellect, it admits no reversals. In other words, it knows exactly what it’s doing when it decides for, or against, God, therefore acting with full consent. This is why the fallen angels are considered incapable of conversion and why a good angel’s choice to love and serve God will exist for all eternity.

If we can’t see them or hear them, how do we know, outside of faith, that an angel is near? Again, because they are spiritual beings who do not fill or occupy space, their presence somewhere is generally made known by a manifestation of their activity, such as when the angel stirred the waters in the pool at Bethsaida (John 5:1-9). They have also frequently appeared to man in human form, as the Archangel Raphael did in the book of Tobit, but there have also been instances where they appeared as extraordinary creatures, such as when Isaiah saw the six-winged Seraphim (Is 6:1-4).

Their method of movement from place to place is also determined by their immateriality. Scripture reveals to us that angels move from one place to another by thought. 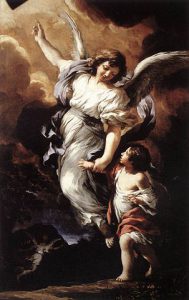 “What man can do mentally, an angel can do by actually transferring his whole being” to the place of his thoughts, explains Father Parente.

For example, while the person reading this article might think of being on a plush tropical island somewhere in the Caribbean, he or she would need to buy a ticket, board a plane and fly there. Not so with an angel! The moment it thinks of that island, it’s there! We learn about this amazing mode of travel in the book of Daniel, when the servant Habacuc was lifted up by the hair by an angel who transported him over 600 miles to Babylon in a matter of minutes (Dan 14:34-42).

Even more astonishing is the strength of an angel which is said to be beyond human comprehension. Good examples of their power can be found in Scripture. In the case of the Syrian general Sennacherib and his army, one angel killed 185,000 armed men in a single night (2 Kings 19:35). Angels have delivered plagues, rescued the Israelites from Egyptian captivity, and intervened on numerous occasions when the people of God were in dire straits.

However, as far above man as these fleshless spirits may be, they have their limitations. They are immortal (Luke 20:36) but their immortality is not a property of their nature. Just like man’s immortal soul, the angel’s immortality depends wholly upon God’s will and mercy. They can only be in one place at one time and cannot perform any miracle unless it is willed by God. Angels are not permitted to know the secrets of the heart or future acts of free will, as these are considered to be exclusively divine perogatives.

That every person has an angel was professed by Jesus Himself when He said, “Their angels in heaven always stand before the face of my heavenly Father” (Matt 18:10). They most frequently manifest their presence to us in the form of inspirations to do good, encouragement in the practice of virtue, and warnings to avoid temptation.

Many of us have experienced their help in time of danger or uncertainty and the annals of the saints are filled with stories of their mystical intervention. St. Pio of Pietrelcina is just one example of a saint who had an extraordinarily close relationship with his or her angel.

There have been many others, including numerous Popes who repeatedly instruct Catholics to get to know this magnificent celestial bodyguard at their side, this great gift from God who stands forever ready to protect them, guide them, and hopefully, carry them safely home to heaven when their earthly exile is complete.

The feast day of the Guardian Angels is October 2.