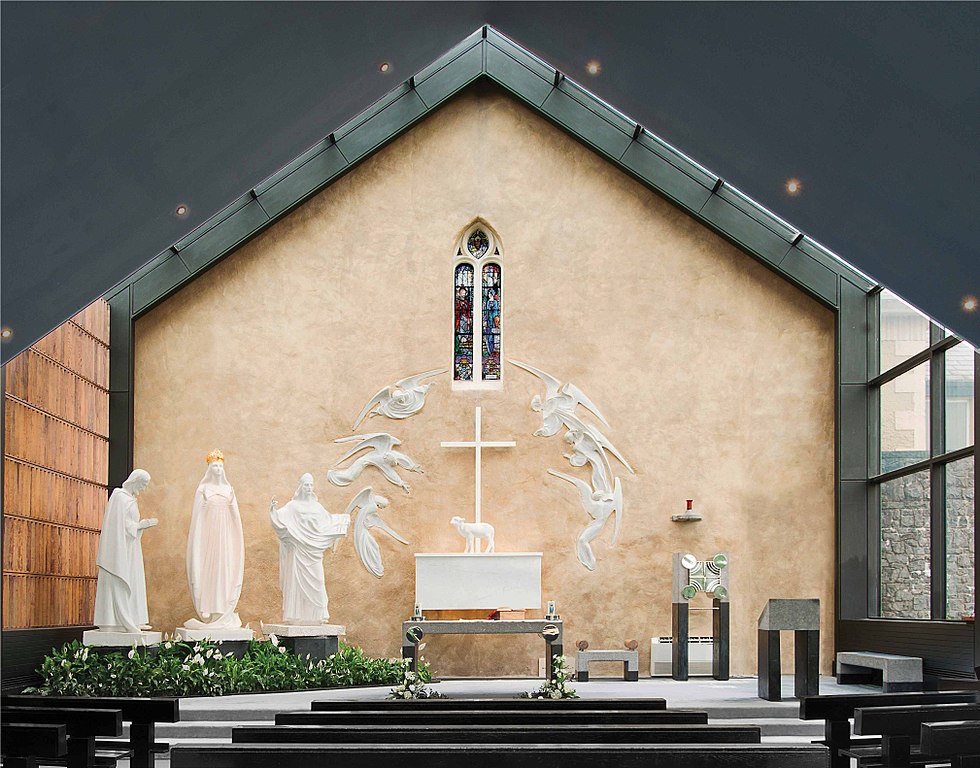 Our Lady of Knock Chapel of Apparitions, at Knock Shrine in County Mayo, Ireland (wikimedia)

This August marks the 140th anniversary of an event of the highest spiritual significance for the people of Ireland, and in fact, for the faithful of the world.

When we think about Ireland, we think green – for shamrocks, gentle rolling hills, grazing pastures. Green is also the color of hope, a virtue upon which the Irish people have relied heavily in light of recurring situations reminiscent of far more somber shades – gray for Gaelic mists, black for mourning.

Consider the mid-to-late 19th century, a particularly difficult period in Ireland’s troubled history. Deadly potato famines, religious persecution, and land wars between property owners and poverty-stricken tenant farmers contributed to the general distress. Families were sundered as many people emigrated to escape such desperate conditions in the homeland.

Indeed, for many Irish people, hard times and grief in one form or another had become a way of life. Onto one remote corner of this troubled setting, heavenly visitors cast a glowing light, illuminating the lowering skies of the dark, rainy night of August 21, 1879. The place was the village of Cnoc Mhuire or Mary’s Hill, better known as Knock, located in County Mayo, western Ireland.

Cited in the anthology A Woman Clothed with the Sun: Eight Great Apparitions of Our Lady, Mary Purcell, 20th-century Irish-Catholic author, writes: “Few Irish counties were as hard hit as Mayo, and the people of Knock suffered their share of hardship, no less than eighteen destitute families in the area being evicted from their wretched cabins about the time of the apparition.”

The light shining over the south gable of the tiny parish church of Saint John the Baptist, heart of the struggling village, revealed three other-worldly figures standing erect, floating several feet above the ground.

The group of fifteen witnesses assembled there, varying greatly in age, recognized the figure to their left as Saint Joseph; that to their right, Saint John the Evangelist. Both were clothed in white and stood back from the apparition’s central figure, the Blessed Virgin. Saint Joseph inclined his head toward Our Lady in a gesture evoking respect, and Saint John held a book in one hand and raised the other as if presenting a teaching.

Mary’s eyes and hands were raised in prayer. She wore a flowing white garment and a crown of gold with a golden rose just above her forehead. Set back from the three figures and to their left was an altar surrounded by angels and bearing a lamb at the forefront with a cross behind it.

The apparition lasted several hours, the awestruck witnesses standing in the pouring rain in prayer and contemplation. Although the rain continued throughout, witnesses attested that the ground beneath the area of the apparition remained dry and hard. One elderly woman tried to embrace Our Lady’s feet, which were bare, but her arms closed on empty air.

Unlike other Marian apparitions, at Knock, no words were uttered. The three figures stood silent, yet their wordless message of hope communicated encouragement to a people striving to hold onto their faith in times of severe trial. The altar, cross, and lamb illustrated the connection between Jesus’ sacrificial suffering and the struggles of God’s beloved Irish people.

The message delivered silently to the people of Knock was the reassurance that comfort and strength would be found by persevering in prayer, uniting their suffering to Jesus’, and participating reverently at Mass. It also served as a gentle reminder that the Mother of God would continue to stand with them through the grinding hardships of this life.

The age-old love of the Irish people for Our Lady was strengthened and her patronage of their country affirmed by this “visit.” The shrine at Knock has been the setting for many healings, physical and otherwise. Countless visitors each year necessitated the building of an airport, and a spacious new church, formally named the Basilica Shrine of Our Lady of Knock, Queen of Ireland. Pope (now Saint) John Paul II visited this largest church and most renowned shrine of Ireland in 1979, the centennial of the apparition.

The feast of Our Lady of Knock is celebrated each year on August 21st. People struggling with life’s sorrows and troubles continue to turn to her as a source of strength, consolation – and most of all, hope.

Prayer to Our Lady of Knock

Our Lady of Knock, Queen of Ireland, you gave hope to our people in a time of distress and comforted them in sorrow. You have inspired countless pilgrims to pray with confidence to your divine Son, remembering His promise: “Ask and you shall receive, seek and you shall find.” Help me to remember that we are all pilgrims on the road to heaven. Fill me with love and concern for my brothers and sisters in Christ, especially those who live with me. Comfort me when I am sick or lonely or depressed. Teach me how to take part ever more reverently in the holy Mass. Pray for me now, and at the hour of my death. Amen.