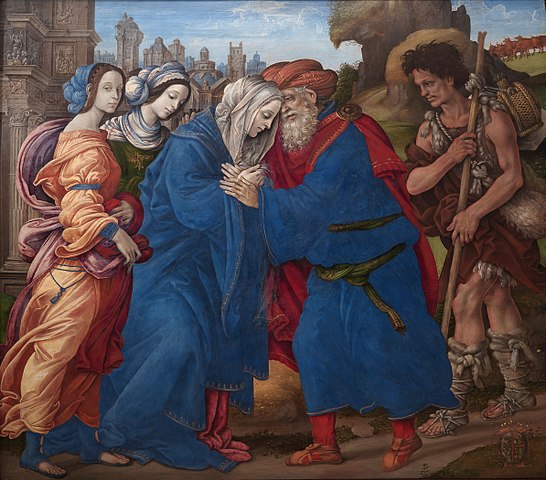 On this feast day of Sts. Joachim and Anne, being a wife and mother myself, I find it quite natural to feel myself being drawn to Saint Anne and the problems she must have encountered after the birth of her daughter, particularly following that world-changing event, the Annunciation (Lk 1:26-38).

Saint Anne is a shadowy figure; all that we know of her, even her name, is what Tradition teaches, making her life a mere question mark for the skeptical. For the faithful, however, she is very real and human. And in terms of the challenges she faced, she remains a most relevant figure for women today.

According to Tradition, Mary’s devout Jewish parents, Anne and Joachim, endured many childless years of marriage before God answered their prayers later in life with a favored daughter whom they dedicated to Him. We can picture the future mother of God’s own Son growing up in the most loving and pious of households. Thus, the strong bonds connecting Mary both to her heavenly Father and to her earthly parents would have been in place from the very beginning of her life.

So it is easy to assume that Mary confided in her mother immediately following the visit of the Angel Gabriel. What an awesome revelation that was, despite the problems it would engender in human terms.

Perhaps it was Saint Anne who encouraged her daughter to make the hasty journey of service to their kinswoman Elizabeth, past childbearing age yet six months pregnant with John the Baptist (Lk 1:39-55). Of course, things became more complicated after Mary’s return to Nazareth (1:56). Following her three-month sojourn, she couldn’t have been home very long before her own condition became obvious.

How did Saint Anne cope with this situation? How does any mother confront the sullying of her daughter’s reputation – the whispered remarks, sidelong glances, disapproving stares? While community shunning was a far more serious situation in Mary’s time, it still occurs, even in today’s “free” society. We can imagine Saint Anne shielding Mary as much as possible, staunchly supporting her, and encouraging her to face what could not be ignored with grace and dignity.

Then there were the problems with Joseph – his initial inner turmoil and confusion as to how to deal honorably with his beloved espoused in her condition (Mt 1:18-24). We can picture Saint Anne sitting quietly with Mary, doing simple household chores together, while Joseph tried to decide what he should do. Through it all, Mary, perhaps uncertain and confused herself, was supported by her mother, whose reward was the joy of seeing Mary and Joseph married.

Of course, not long after the joy came the sorrow – the pain of seeing the couple off on the difficult but necessary journey to Bethlehem when Mary was close to delivery (Lk 2:1-5). How Saint Anne would have struggled with the knowledge that she would not be present to support her daughter at the hour of birth, or to see her grandson as a newborn baby!

All this was difficult enough, but what is perhaps most heart-wrenching is the scenario that played out not long after Jesus’ birth, when Mary and Joseph fled to Egypt with Him (Mt 2:13-15). The duration of their stay until the death of Herod is unknown. How long did Saint Anne have to endure heartache and anxiety as to their whereabouts and how they were faring?

Talk about a test of faith! We can assume that most of the time, Saint Anne was comforted by the knowledge that the Son of God was physically present within that little family – but were there also times when that belief was subjected to very human doubt and questioning?

At the very least, there had to be that unique brand of loneliness of a loving woman separated by great distance from those dear to her. It was only with the return of the Holy Family to Nazareth that Saint Anne’s faith would be rewarded within the circle of her reunited family.

Saint Anne would be able to relate to real-life problems and thorny situations faced by many women today, two thousand years after her death. She could sympathize with those struggling with infertility, and she also would understand the special challenges that can accompany parenting beyond traditional age.

From her day to our own, countless mothers have accompanied their daughters through the troubled waters of unwed pregnancy. Like her, many grandmothers today are deprived of participating in the day-to-day lives of beloved grandchildren separated by great distances. (Technology can be an invaluable resource in such situations, but we have yet to come up with a way to give a Face-time hug in the flesh.) And sadly, too many still struggle with the heartache known only to those whose children and grandchildren become refugees for political, social, or economic reasons.

Saint Anne embodies the ideal of the holiness we can achieve in family life, even in faith-challenging circumstances such as these. Let’s not undervalue or overlook her when we need someone to turn to for guidance and intercession. Let’s give her a chance, this mother of the Blessed, grandmother of the Savior.

O glorious Saint Anne,
you are filled with compassion
for those who invoke you,
and with love for those suffer.
Heavily burdened with the weight of my troubles,
I cast myself at your feet
and humbly beg of you to take the present intention,
which I recommend to you in your special care.
Please recommend it to your daughter,
the Blessed Virgin Mary,
and place it before the throne of Jesus,
so that he may bring it to a happy issue.
Continue to intercede for me
until my request is granted.
But above all obtain for me the grace one day
to see my God face to face,
and with you and Mary and all the saints
to praise and bless him for all eternity. Amen.
Our Father; Hail Mary; Glory be.
Saint Anne, help me now and at the hour of my death!
Good Saint Anne, intercede for me!