Media watchdogs are warning parents that a new MTV show, Skins, which features teen actors as young as 15 in extremely explicit scenes involving sex and drugs, is “the most dangerous program ever” for children. 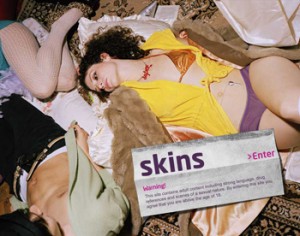 The Parents Television Council (PTC) says the show, which airs on Monday nights at 10:00 p.m. EST and as early as 9:00 p.m. in the Central and Mountain time zone, is so risque it could be considered child pornography.

According to The New York Times which describes the show as a “new hit drama . . . featuring the sexual and drug-fueled exploits of misfit teenagers”, executives at the cable channel are concerned that a few scenes from upcoming episodes might even violate federal child pornography laws which prohibit the depiction of minors engaging in sexually explicit conduct.

For instance, in one planned episode, a young actor is shown from behind as he runs down the street naked. Played by actor Jesse Carere, the show is about his use of an erectile dysfunction drug.

Even though MTV claims the show, which has a TV-MA rating, meaning it may be unsuitable for children under 18, was “specifically designed to be viewed by adults,” the channel deliberately casts actors who are between the ages of 15 and 19.

That they are preying upon a young audience is obvious in a company press release which boasts that the show’s premier on Monday night drew 3.3 million viewers and set a new first-episode record for the channel among viewers age 12 to 34.

“It appears that MTV is deliberately trying to establish a new standard for what is considered acceptable for kids,” writes the PTC, “and they are trying to convince advertisers that they should sponsor this sick show, because kids are watching.”

In fact, the creator of Skins recently told Adweek that “what Skins delivers is kids. That’s what it delivers to advertisers.”

And advertisers, such as Taco Bell, are listening, the PTC claims.

For this reason, the company has produced an e-mail about the show and are urging parents to copy it and take it to the manager of the nearest Taco Bell.

“Tell him or her what you think of their company promoting casual sex, drug use and alcohol abuse to children. And let them know that Taco Bell’s actions have an influence when it is time to ‘vote with your wallet’.”

Click here to obtain a copy of the PTC e-mail.