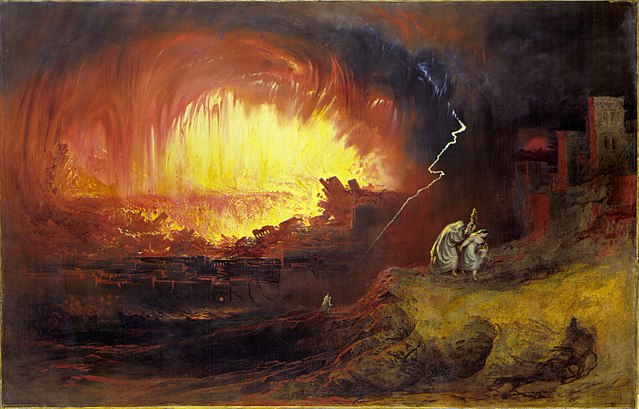 A team of archaeologists has found evidence that the biblical cities of Sodom and Gomorrah were indeed wiped out by “fire and brimstone” when a meteor collided with the atmosphere and exploded over the area.

Forbes is reporting on a report submitted at the annual meeting of the American Schools or Oriental Research last month by archaeologist Phillip J. Silvia of Trinity Southwest University in Albuquerque. His team has been working on the excavations at the Tall el-Hammam archaeological site in Jordan which many believe is the same place that was once known as Sodom.

“Samples from the site show that an extremely hot, explosive event leveled an area of almost 200 square miles including the Middle Ghor – a circular plain to the north of the Dead Sea,” reports science writer Eric Mack for Forbes.

The intense shock wave from the blast wiped out 100 percent of the Middle Bronze Age cities and towns in the area, of which anywhere from 40,000 to 60,000 people were living at the time. It also stripped agricultural soils from once-fertile fields, covering the area with what researchers theorize was a “super-heated brine of Dead Sea anhydride salts.” The destruction was so severe that it took at least six centuries for the region to recover and for civilization to return to the area.

The evidence is similar to what happened in the Tunguska incident in 1908 when a fireball in the sky exploded and leveled a large swath of Siberian forest. A more moderate incident occurred in 2013 over Chelyabinsk, Russia when a meteor collided with the atmosphere and sent a shock wave powerful enough to blow out thousands of windows.

“Archaeologists may be able to answer some of the big questions behind the story of Sodom, including whether it really existed, where it was and what actually destroyed it,” Mack writes, “but even if it turns out that Tall el-Hammam is Sodom and it was destroyed by a cosmic air burst, the biggest question remains: Did someone, perhaps a deity, order an asteroid hit on Sodom?”

Recorded history certainly points to a deity being responsible for this catastrophe. As Matthew Cullinan Hoffman writes for LifeSiteNews.com, the approximate date of the annihilation of the two cities matches the time period corresponding to the event in Genesis 19.

In verse 24 we read: “The Lord rained upon Sodom and Gomorrah brimstone and fire from the Lord out of heaven,” which seems to indicate a rain shower of super-heated stones that poured out of the sky.

“The Hebrew word for ‘brimstone’ is normally applied to sulfur, which is a stone that burns,” Hoffman explains.

The Bible also describes the same kind of devastation to the surrounding area that archaeologists discovered, including the destruction of plant life. “And he destroyed these cities, and all the country about, all the inhabitants of the cities, and all things that spring from the earth,” we read in verse 25.

We also know that when Abraham looked toward Sodom and Gomorrah, “he saw the ashes rise up from the earth as the smoke of a furnace” which is precisely what it would have looked like after such a cataclysmic event.

“Genesis and other books of the Bible state that Sodom was destroyed in retribution for the sexual perversion of the inhabitants, particularly their desire for sexual relations with the same sex, which the Scripture calls an ‘abomination’,” Hoffman points out.

This new research may not give us all the answers but it certainly confirms what hundreds of millions of the faithful have believed since the earliest days of life on earth –  there is a God and He is in total control of world in which we live.