Judge John Roll, who was murdered Saturday by a crazed gunman in Tucson, Arizona, was much more than an exemplary jurist. He was a daily communicant who was on fire for his faith. 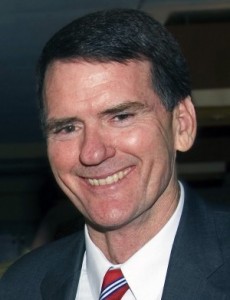 In a statement appearing in the Arizona Daily Star, Tucson Bishop Gerald F. Kicanas had nothing but praise for Judge Roll. “For many years, he would begin his day serving the early-morning Mass at SS. Peter and Paul,” the Bishop said in a statement. “He proclaimed the Word of God as a lector at SS. Peter and Paul and St. Thomas the Apostle. He lived his faith as a servant of our nation for the cause of justice.”

As has been widely reported, Judge Roll had attended Mass just before he decided to stop in at the shopping center where Congresswoman Gabrielle Gifford was hosting a “Congress on your Corner” event on Saturday. He went there intending to congratulate her on her recent re-election, but was gunned down before he had the chance.

Writing for the Catholic Phoenix, reporter J. Hanson had a chance to hear Judge Roll speak this summer when he addressed the St. Thomas More Society and the Christian Legal Society.

“He was committed to Christian truth,” Hanson writes.  “It also seems that Judge Roll passionately—and frequently—experienced Truth in the Holy Mass. One person I spoke with today described Judge Roll as a ‘daily communicant.’ This fits with a memory I have of Judge’s Roll’s address this summer, specifically when he was discussing his appointment to the federal judiciary.

“According to the story as I remember it, his family learned of the appointment when his wife answered the telephone one Saturday morning. It was the president. He asked her if he could speak to her husband. She told him that he couldn’t—John Roll was at church that morning. The president would need to call back after Mass.”

Relying on the notes Hanson took during the speech, the judge told the students, “God doesn’t bring you to a point in order to abandon you.”

The judge was counseling them about the need to trust that God’s plan would be larger than any temporary troughs in our future legal experience, Hanson believes. “In the context of the judge’s talk, the line rang with the solid practical wisdom of a mature Christian.”

Reflecting on how the judge died in the crossfire on Saturday, Hanson said the killing was indeed senseless.

“But in the words of the wise jurist: God doesn’t bring you to a point in order to abandon you. Judge Roll knew the Mass. He knew the Sacrifice of the Just One. He knew, then, that although men intend evil, God can work it out for good, though His plan for it may be larger than we can comprehend—and more sorrowful than we expect.”

Everyone who knew Judge Roll agrees that he would have wanted the community to carry on and especially to not lose the faith over what happened in Tucson on Saturday.

Former State Bar President Dee-Dee Samet, who was a friend of Roll’s, said in a news release that “Judge John Roll was not just a great lawyer and respected judge, but he was a true friend and wonderful human being. I don’t know of a kinder or more considerate person. My heart goes out to his wife, Maureen, and their family. I think Judge Roll would want us all to carry on, despite this horrific event, to serve our community and to not lose faith; that’s just the type of person he was.”

Supreme Knight Carl A. Anderson also expressed “profound sadness” at the death of Roll, who was a Fourth Degree member of the Knights of Columbus.

“The senseless carnage in Tucson is a terrible tragedy for the victims, their families, the people of Arizona and people of good will everywhere,” Anderson said.  ”We feel a tremendous sense of loss at Judge Roll’s death, and for all, young and old, who lost their lives in this attack.  We pray for God’s mercy on all who have been touched by this tragedy.”

Judge Roll was a graduate of Salpointe Catholic High School and the University of Arizona College of Law. He took his seat on the federal bench in 1991, appointed by President George H.W. Bush to the U.S. District Court. He previously held a post in the Arizona Court of Appeals, Division II in Pima County.

He is survived by his wife, Maureen, three children and five grandchildren.