Two major pieces of legislation are poised to pass the Senate within the next few days – one that will allow homosexuals to serve openly in the military in spite of serious concerns from top military personnel, and another that will push through a mammoth spending bill in which millions of dollars of potential abortion funding are hidden. 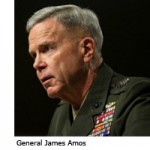 The Family Research Center is reporting that a stand-alone version of a repeal of the “Don’t Ask Don’t Tell” military policy banning gays from serving openly has a very good chance of passing the Senate due to the support of four “moderate” Republicans – Sens. Scott Brown (R-MA), Maine Senators Olympia Snowe and Susan Collins, and Alaska Senator Lisa Murkowski.

Yesterday, General James Amos, Commandant of the U.S. Marine Corps who does not support repeal and questions the validity of the Pentagon study, turned on a reporter when questioned about the bill.

“I don’t want to lose any Marines to the distraction,” he said. “I don’t want to have any Marines that I’m visiting at Bethesda [ Naval Medical Center ] with no legs be the result of any type of distraction… Right now is a very intense period of time for a pretty healthy slice of the United States Marine Corps. This is not training. This is what I call the real deal. And the forces that wear this uniform… came back and told their commandant of the Marine Corps that they have concerns. That’s all I need. I don’t need a staff study. I don’t need to hire three PhDs to tell me [how] to interpret it… [I]f they have concerns, I do too. It’s as simple as that.”

” . . . [In the] early years of Vietnam, 9th Marines, West of Da Nang, rifle company on a ridgeline combat outpost, the intelligence was that the North Vietnamese were going to attack, that night. The unit was put on 50-percent alert, which meant one slept, one stood on watch. About 1 o’clock in the morning, a fight broke out in a foxhole because the young marine was being molested by his squad leader. To the right of that foxhole, there was a machinegun section that opened [fire] and almost killed a combat patrol that was out in the front [because they thought the unit was under attack].”

Tony Perkins, president of the FRC, asks, “How many brave men and women are liberals willing to sacrifice so that homosexuals can flaunt their lifestyle? The only reason for changing the present policy is if it would help the military accomplish its mission. So far, no one has produced a single reason how it would. Until then, the Senate has to ask itself: Do they want the blood of innocent soldiers on their hands just to appease the political base of Sen. Harry Reid (D-Nev.) and Nancy Pelosi (D-Calif.)? If they can live with that, then they’re unlike any human beings I’ve ever met.”

The second piece of legislation that is about to be passed is a massive pork-laden omnibus bill that will spend $1.2 trillion taxpayer dollars. The 1,924 page bill contains over 6,600 earmarks for pet projects such as “pig waste management” and maple sugar research. Once again, Senate Majority Leader Harry Reid (D-NV) is trying to ram the bill through the week before Christmas with the hopes that Senators anxious to get home for the holidays will vote for the bill just to get out of town early.

The problem is that this bill contains the appropriation of $750,000 for an ObamaCare “slush fund” that will have no oversight.

“Among other concerns, taxpayer funds could be used for abortions in D.C., $740 million would go toward international population control, and Title X funds would get a multi-million dollar boost.” Perkins writes.

“Senate Republicans have the power to stop this railroad exercise if they stick together and insist that the Senate do the business the right way. But the right way means saying ‘no way’ to this parade of bad bills.”

Citizens are being encouraged to contact their Senators today to voice their concerns about these bills.