MK writes: “I was told Wicca people aren’t involved in witchcraft, that they are just people of the earth.  They respect the earth and are into herbs, natural things.  I thought I heard they are with the new age.  What do you know about them?” 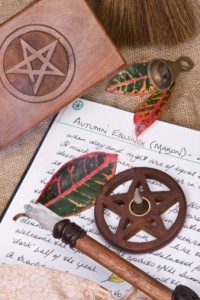 MK, everything you’ve heard about Wicca is true – but only some of the time.

Sometimes referred to as the Goddess movement or Goddess spirituality, many of today’s witches belong to a modern subset of witchcraft known as Wicca. Recognized as an official religion by the U.S. Supreme Court in 1986, Wicca is derived from the old English word “wic” meaning “witch”, and is a form of modern religious witchcraft that was originally meant to be a goddess-centered nature religion.

It was invented in the 1950’s by Gerald Gardner who claimed he learned Wiccan lore and many of its rituals from a centuries-old coven of witches that no one has ever been able to locate. He is believed to have invented most of the rites or borrowed them from rituals created earlier in the twentieth century by the notorious British Satanist, Aleister Crowley.

Gardner’s new version of witchcraft became popular in the U.S. after an appearance on the Today Show by professed witch, Sybil Leek, who made witchcraft seem harmless and interesting.

Once it reached our shores, it began to morph into what some experts call a “populist magical mystery cult” that includes a vast collection of ancient Celtic, Greek, Roman and Egyptian religions, as well as many forgotten traditions such as Shamanic Healing Circles and Toltec Wisdom. It also incorporates political causes and enthusiasms (chiefly of the left-wing variety) such as feminism, environmentalism, “gay” activism, and antiwar activism.

The hallmark of Wicca is its diversity, which is why I say that everything MK writes about it is true sometimes.

“Witchcraft is individualistic to the point of being anarchic,” writes expert Alexander Brooks, “with no centralized authority or even any agreed-upon definition of what a ‘Witch’ is. In effect, a witch is whoever says they are a witch, and witch beliefs and practices amount to whatever individual witches actually believe and do.”

Anything goes for today’s modern witch or Wiccan, if you prefer.

However, there are four basic tenets that can be ascribed to the underlying belief system of modern witchcraft.

You will also find no central authority or established organization in the Wiccan religion and the internet is its unofficial “church.” A random Google search lists nearly 200,000 sites for witchcraft and slightly more for Wicca. There are sites for people of all ages, complete with chat rooms, coven-finders, and bulletin boards.

Many wiccans are involved in occult practices such as magick, clairvoyance and divination and, as previously noted, can ascribe to any number of New Age and/or neo-pagan beliefs.

This is why any involvement in witchcraft is explicitly condemned in the Bible, such as in Deuteronomy 18: 10-14 as well as 2 Kings 21:6 and any other place in Scripture where sorcery and magic is forbidden.

But even if a Wiccan is not involved in the occult, cult expert, Father Lawrence Gesy, explains why it must still be avoided:

“The practice of Wicca is incompatible with Christianity because it is based on the worship of pagan deities, and is therefore a sin against the First Commandment,” he told me in a phone interview. “Wicca is basically a pantheistic religion, which means it is a worship of nature. It’s pagan, which means it is also polytheistic in that it worships multiple gods and goddesses. On the other hand, we are monotheistic, meaning we worship the one true God.”

For more information on Wicca/Witchcraft, see our booklet in the Learn to Discern: Is it Christian or New Age series. Just click on the “New Age Resources” button on the navigation bar above.