ES writes: “I have a friend who lost her daughter to cancer. She was going to be 13 years old the past May. The father sells cookware for a living. One day, he went in to see his boss and the boss’ wife happened to be in the office. Even though she knew nothing about the death of his daughter, she told him: ‘Senor Flores, I see a girl next to you leaning into your shoulder. Who is she?’ . . . 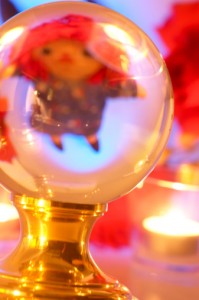 “My friend was astonished because he had not told anyone about the death of his daughter. He replied: ‘Yes, she is my daughter. She died about few months ago.’ The lady told him not to tell anyone about it because she had many problems in her job because she is a psychic. She added that the (deceased) girl can not say anything to her, she just looks at her but nothing else. My friend does not know what to say about it. He truly believes in God and knows that his daughter is in heaven. How true is this?”
Sadly a manifestation like this is very possible to people who dabble in the dark arts – which is what psychics do. And we all know who is the master of the Kingdom of Darkness – Satan. This explains why he is so famous for impersonating the dead. He’s been doing it for centuries and is very good at it.

If this woman did see someone standing next to your friend, I can assure you it was not his daughter. It was a demon impersonating his daughter for the purpose of disturbing this man’s soul – which he was only too successful in doing.

This is just one of many reasons why the Church forbids the faithful to become involved with psychics, channelers, or any other mechanism through which the dead are deliberately conjured. “All forms of divination are to be rejected: recourse to Satan or demons, conjuring up the dead or other practices falsely supposed to ‘unveil’ the future.” (Catechism No. 2116). We also hear Moses warning the Israelites against imitating the Canaanite “abomination” of seeking the truth from the dead in Deuteronomy 18.

Even though it usually startles a person when a psychic who is unfamiliar with their situation can so perfectly read their life story, it shouldn’t because this kind of manifestation is “small potatoes” to a demon.  Angelic beings have incredible powers and it would be well worth your while to invest in a good book on this subject that presents Catholic teaching on angels to help you better understand the capabilities of both good and bad angels. I suggest the book Catholic Teaching on the Angels by Fr. Pascal Parente or Everything You Ever Wanted to Know About Heaven by Peter Kreeft. Both are excellent sources.

I would also like to point out that psychics are notorious con-artists. They use all kinds of techniques such as hot- and cold-reading to make their predictions. (My booklet on psychics explains this in greater detail.)

I must admit to suspecting some of these shenanigans in the case of ES’s friend. First of all,  I find it difficult to believe that he never spoke to anyone about his daughter’s illness (which was probably protracted because it was cancer) and tragic death. Chances are, if he did confide in an employee or two, you know how offices are. Word could have easily spread to his boss and, subsequently, to his wife the psychic. The man may not even be aware that he spoke to someone about it. Perhaps he’s forgotten it, or maybe someone found out in some other way, through another family member or associate, and told his coworkers.

Whatever the case, your friend will be comforted to know that his daughter is not spending her eternity standing next to him. “Each man receives his eternal retribution in his immortal soul at the very moment of his death, in a particular judgment that refers his life to Christ,” says the Catechism (No. 1022). At that time their eternal destiny is determined.

Once the end of life has occurred, it is over. We will not return to earth or assume other earthly lives such as in reincarnation because “it has been appointed for men to die once” (Ibid No. 1014).

These are our beliefs, which are all based on Divine Revelation.

I pray that your friend’s heart will be comforted by the Truth and that the Lord Jesus will heal him of any injuries he has sustained as a result of these false revelations.