This month’s Facilitator Spotlight is Jennie Stanbro.  Jennie experienced many challenges, including cancer, as she went forward in her mission to begin Women of Grace in her parish but she persevered and through it all, Our Lady was there to guide and direct her efforts.

I stumbled across Johnnette’s The Abundant Life television show on EWTN and learned that the Woman of Graceannual retreat in Malvern, Pa.  was being offered near my home in May 2008. I really didn’t know much about the program yet, but I eagerly signed up and attended. I came home from that retreat completely on fire – this was a message that had to get out to all the Christian women in my life.  However, two challenges quickly doused that fire. The first of these was overcoming my own fear. Being a stay at home mom for 35 years, I was not comfortable in public speaking, running a program, or how to position and launch such an endeavor. The second challenge was from my parish itself; I knew our parish pastor was concerned about too many lay programs being propagated without proper formational leadership, and I certainly didn’t think I was the one that could lead such an effort. The pastor asked that I wait until we could go through some internal restructuring of our parish and he could offer some basic formational programs to those interested in leading specific groups. I was discouraged that he didn’t immediately embrace the program, but I reluctantly supported his approach, knowing “it is in God’s time, not mine.”  But as time went on, I became more discouraged that we had not launched Women Of Grace yet and I wanted to give up many times on getting the program launched.

The Holy Spirit had other plans.  Two years after attending that first Women of Grace retreat in 2008, my Pastor approached me in May of this year and asked if I was still interested in starting a woman’s spirituality group!  Though finding it hard to believe, I quickly replied yes and began daily rosaries asking for Mary’s guidance as I was totally unsure of what I was getting myself into.  My pastor also asked for a ‘business plan’ of sorts, how we would structure and deliver the program, what was the long term objective of a women’s spirituality group, how would it be maintained, and so on. Now I knew I was over my head! I had no idea how to write such a plan. But through the Holy Spirit and some help, I developed a detailed plan that was accepted. I knew what I wanted out of the WOG program, but to go through that exercise was very helpful for me, as it made me consider what the objective was for the women of our parish. I knew the WOG program would serve as our ‘introductory’ foundational spiritual formation program, but it was even more important to ensure that we established long term goals and develop an expectation within our groups that women were being called to a vocation with God; a lifetime commitment to apply the teaching in this program throughout their lives – work, home, community activities- everyday, in everything we touched. 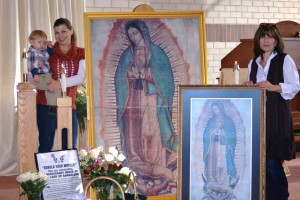 Now the real work would begin – and I prayed more than ever to Our Blessed Mother for guidance, because I couldn’t do this alone!  She answered this call as over the summer, six women made themselves known to me interested in becoming facilitators, and we began to meet twice a month to preview and become familiar with the Full of Grace study. Of course, the evil one was not happy, and always looks for ways to intervene. I had overcome all of the roadblocks he had thrown up – my own fears, doubts, and frustrations, and now that we were getting started, he had one more surprise to interfere with our plan.

After waiting over 2 years for parish approval to launch the program, only 2 short weeks later I was diagnosed with breast cancer in late May. While I simply could not believe I would ever be diagnosed with breast cancer, my bigger frustration was, “Why Now?”  I was overwhelmed with anger as I saw my hopes disappear thinking I could not move forward with the program.  I physically felt fine, but the prognosis for treatments I would need seemed as though there would be no way I could dedicate the time and energy to ensure we could offer a successful program.

Once again I prayed to Our Blessed Mother to intercede. As difficult as it was, I asked Her to ask Our Lord, ‘show me what is Your will, and I will be obedient’, as I remembered from that first retreat I attended in 2008, “Do Whatever He Tells You”. The Holy Spirit and Blessed Mother have guided me continually from that day, allowing me to get this far, and I prayerfully put my faith in Her as my intercessor. Already signed up to attend the 2010 Women of Graceleadership seminar sponsored by Johnnette in Vineland, NJ, I went reluctantly and a bit dejected.  I was fortunate to meet Johnette and Joanne Kane at this conference, and I talked about our program launch, and I shared my story and frustration.  Rather than responding in shock, Johnette quickly and almost matter of factly reminded me that Satan will use whatever means  possible to prevent us from doing the Lord’s work. Her reaction was comforting, in essence reminding me that all of God’s work will takes sacrifice.

I decided that day that I would not let God’s plan be averted.  God had a plan for me and Woman of Grace would now be a part of my healing and my life! He has not let me down as I meet and share with the many woman who have come into my life as a result of saying “yes” to this call.

Our Blessed Mother, I believe, has guided me from the beginning and even made her presence known again to me recently. We had an information table set up with an image of Our Lady of Guadalupe in the narthex on a Sunday in August. By God’s will, a woman from a neighboring Diocese, Bernadette, was visiting a sick friend in our area that same day, and found herself attending our Mass. After Mass, she approached me and asked, “What does Our Lady of Guadalupe have to do with your ministry?” I informed her about Women of Grace and that Our Lady of Guadalupe was the Patroness. She went on her way, and a couple days later, I received a call from Bernadette. She reminded me of our “meeting” and then informed me she was the Guardian for the Missionary Image Of Our Lady Of Guadalupe during her upcoming visit to New Jersey planned for December. She wanted to know if my new women’s group would like to receive her. Knowing the image plays such importance in the WOG study,   I immediately said YES, wondering how this could be happening.  I had prayed to Our Blessed Mother for months to guide and inspire me and now, she was coming to my parish! Not only was she making her presence known but the date she would arrive would be December 9th, the feast day of St. Juan Diego!  How awesome is our God! As I sat and watched faithful men and women venerate  Her throughout that day, only a little over a week ago now,  I  couldn’t help but think back to Scripture, when  St. Elizabeth greeted Mary crying out “Blessed are you among woman and blessed is the fruit of your womb. And why has this happened to me, that the mother of my Lord should come to me?” How abundantly blessed I felt!

In October we launched Women of Grace in our parish. Expecting perhaps 10 to 20 women for our initial offering, we were excited (but nervous) to have over 50 women register as participants. We are halfway through the study, resuming Chapter 5-Wisdom in January. We are using the Full of Grace Foundational Study as a formation tool with an expectation that this group will be an ongoing women’s spirituality group focused on understanding a woman’s call to her true femininity as a daughter of God, both physically and, more important, spiritually. We have structured our program to meet once every two weeks, running a Wednesday and Saturday groups simultaneously. We have a solid core team of 6 facilitators in place to lead each of the small groups. While the Women of Grace program beautifully teaches us about our true call to femininity, it is clearly at times a message that is foreign in today’s time. I have been blessed to have strong facilitators who love the Truth and the Church, yet are compassionate and understanding, knowing that we each struggle with areas where we have fallen from grace.

So for any woman who feels overwhelmed or under-qualified to lead, or even attend such a group, there can be no one more unlikely to have led such an endeavor than myself! If it is God’s will that you are called, and you answer that call, the Spirit will enable you on your mission. Be patient, be prayerful, and place yourself at the foot of the Cross and you will be amazed at the abundant blessings that He will bestow upon you!

To find out more about how you can become a Women of Grace® facilitator, please contact us at 1-800-558-5452 or visit our website at www.womenofgrace.com.  If you are a facilitator and want to submit your story for the Facilitator Spotlight, please e-mail us at isabelle@lhla.org.